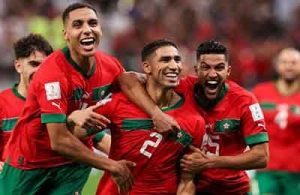 This was needed to conclude an extraordinary penalty shootout between Morocco and Spain on Tuesday, in the round of 16. After Bono’s exploits against the Spanish shooters, Achraf Hakimi qualified the Atlas Lions for the quarter-finals with style. The PSG player pulled off a panenka that left Unai Simon helpless.

Morocco will remember the first qualification in its history for the quarter-finals of the World Cup. And that unforgettable penalty shootout. There was the cake, cooked masterfully by Bounou. The Moroccan goalkeeper, first saved by his post on Pablo Sarabia’s first attempt, then pulled out all the stops to divert shots from Carlos Soler, then Sergio Busquets.

And thus offer the qualifying ball to Achraf Hakimi. The icing on this cake. In an indescribable atmosphere, the Parisian side showed remarkable composure. And technical mastery. With a subtle panenka, he left Spanish goalkeeper Unai Simon no chance on the shot on goal for the Moroccans’ victory. After this feat against Spain, they will face the winner of the meeting between Portugal and Switzerland to try to continue their fabulous epic in Qatar.