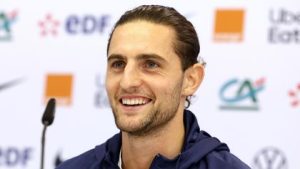 We will not go so far as to say that it is a new Adrien Rabiot who is playing in Qatar, but the conjuncture of several elements makes him, obviously, more serene. The middle of the France team has been evolving at a very high level since the start of the World Cup and his relationship with Didier Deschamps is in good shape. To top it off, he no longer sees the press in the same way.

With this French team, the game of “who achieves the best World Cup?” is of little interest. Only one man, Kylian Mbappé, can claim this status and day after day his name remains on everyone’s lips, especially those of the English press, for that matter. But if it was necessary to seek his following, Adrien Rabiot would have a sacred candidacy to present. It turns out that everyone sees that the “Duke” honors his rank in Qatar, from the coach to the players of the France team and even on the side of the journalists.

“I’m going through a very good football period, for several months at Juventus and there at the World Cup, Adrien Rabiot immediately noted. I would say that it also comes from the fact that I grew up, that I matured, that my football has grown too. It’s probably the best time I’ve had in my career.” Excellent in opening against Australia, still essential against Poland in the round of 16, the former Parisian had a blast. And when asked whether his excellent level underlined by the observers was going to touch him or not, Rabiot plays honesty.

Rabiot does not ignite

“A bit of both,” he replied. “I try to stay focused on my football, competition, not scatter too much. We know that it can go fast, on one side as on the other. I have often experienced it. It is nice to be recognized but as I said, there was a time when I suffered a lot of criticism, I was not shot down. Conversely, I’m not going to ignite it but it’s still happy. ”

Adrien Rabiot, without looking for approval and without getting the air, is and will always be a player who will listen to what we say about him. Because her young years have charged a lot. What did we not say or written about him? That he had talent obviously but also that he was indolent, even insolent. The end of his Parisian adventure, his sidelining, the episode of reservists of the 2018 World Cup, all moments that have scrambled his image.

Today it is not unhappy to make it evolve. With Didier Deschamps first which he did not know what to expect when he returned to the end of the summer of 2020. “We got to know each other better, he understands me better, he knows my better Personality. We are much closer today, “he narrates. But as to what recognition touched him most, between that of the “coach”, his partners or journalists, Rabiot chooses the last.

We must all go through the press conference, almost all

“That of journalists because you are difficult to convince, I have very often been criticized. Sometimes in my opinion, on this side it is a great recognition. Sometimes I have not always agreed with What I heard about the quality of my game, performances. Sometimes I found it severe. It’s something that pushes me too, I try to put everyone on this side. ” It is clear that in Qatar, he succeeds brilliantly.

Adrien Rabiot did not display the constant smile of an Ibrahima Konaté who preceded him in the exercise of the press conference on Wednesday. But the “Duke” has changed, he opened … and does not hesitate to laugh with the audience.

“I do not choose to come at a press conference, he calm in a laugh. We must all go through there, almost all … (smiles). I do it with pleasure, it’s good Being able to exchange, to be heard. I have always said it and I repeat it, it is not my favorite exercise but I find that there is an improvement in the relationship between you and me. ” Obviously, yes.