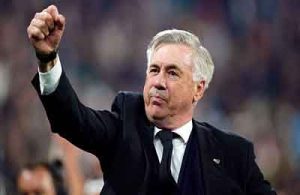 The result came after the team defeated Atletico Madrid 2-1 at the Civitas Metropolitano Stadium, yesterday, Sunday, in Spanish capital derby.

The goals came from Rodrigo and Fede Valverde in the 18th and 36th minutes, respectively, while Hermoso scored for Atletico in the 83rd minute.

Ancelotti posted, through his account on “Twitter”, his picture from the match, and wrote on it: “Happy to win the derby, and to continue the series of victories.”

This season, the royal team has won all the matches it has played in the Spanish League and the European Champions League.