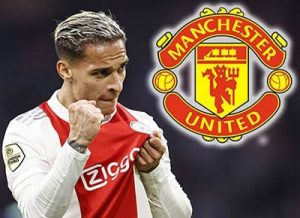 Manchester United are close to announcing the signing of Brazilian winger Antony for 84 million pounds, as the Ajax star arrived at the Red Devils’ Carrington training grounds for a medical examination.

And according to the newspaper, “The Sun,” Anthony may be available for the Manchester United match against Arsenal next Sunday evening, in the sixth round of the English Premier League.

Manchester United finally reached an agreement with Ajax to sign the 22-year-old, after the Dutch club rejected several offers from the Red Devils.

A video clip was circulated on social media, in which Anthony appears beaming, as he walks into the United training complex, where it is expected that his contract will be officially announced tomorrow at the least.

But “The Sun” indicated at the same time, that Anthony is still waiting for his work permit, which will put him outside Manchester United’s accounts to face Leicester City on Thursday evening in the fifth round of the league.

Antony will be the fifth player to join United under former Ajax coach Eric Ten Hag in the current Mercato, after the arrival of Terrell Malacia, Christian Eriksen, Lisandro Martinez and Casemiro.