Argentina beats the Netherlands on penalties (2-2, 4-3 ) and joins Croatia 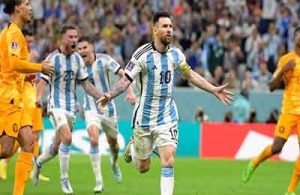 Argentina played to be very scared, but it does hold its ticket for the last four. While leading 2-0 ten minutes from time, the Albiceleste were caught in extremis by the Netherlands and had to rely on penalties to snatch their qualification (2-2, 4-3 ). Lionel Messi and his teammates will face Croatia in the semi-finals on Tuesday (8 p.m.).

At the end of the suspense and on the verge of a nervous breakdown, Argentina joined Croatia in the semi-finals. Thanks first to Lionel Messi, then after a penalty shootout perfectly managed by his goalkeeper Emiliano Martinez, the Albiceleste finds the joys of a last four at the expense of the Netherlands (2-2, 4-3 ). Caught after added time in the second period after a brace from Wout Weghorst, the South Americans finally exulted on a final winning shot from Lautaro Martinez.

Like his teammate Neymar, a little earlier, Lionel Messi was not very far from leaving the road at the World Cup this Friday. But the “Pulga” will have two more World Cup matches to play, for which it is the last World Cup. It would have been cruel to see the seven-time Ballon d’Or ejected after having once again carried an Argentina more focused on physical combat than on the circulation of the ball during this quarter-final with 15 yellow cards.

A long late match, then a crazy final

In a very tight first period but with very few clear chances, it was the PSG player who unblocked the situation with a laser pass. Upon receipt of this offering, right side in the Dutch area, Nahuel Molina scored the first goal of his career in selection (0-1, 35th). The Argentinians even thought they had done the hardest part, in the middle of the second half, when Marcos Acuna won a penalty past Denzel Dumfries.