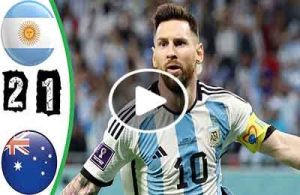 Argentina continued its adventure in the Qatar World Cup, by qualifying for the quarter-finals after defeating Australia (2-1), this evening, Saturday, in the match that was held at Ahmed Bin Ali Stadium.

Argentina duo Lionel Messi scored in the 35th minute and Julian Alvarez in the 57th minute, while Australia’s only goal was scored by Enzo Fernandez by mistake in the 77th minute.

Argentina will thus set a quarter-final date against the Netherlands, which earlier today beat the United States.

The first attempt in the match came in favor of Argentina, with a shot from Gomez from the edge of the area in the 17th minute, which went wide of the goal.

With the passage of time, Australia began to gain confidence and advanced to the attacking side, and appeared for the first time by ascending to Sotar for a cross from a corner kick in the 29th minute, with a header that collided with Romero’s feet.

Argentina opened the scoring in the 35th minute, after Otamendi paved the ball for Messi inside the area, and the latter hit a curved ball that hit the net.

Despite Argentina’s progress, this did not give them the confidence to advance further to the attack, nor did it free Australia to move forward in order to adjust the score, to end the first half with Argentina’s lead (1-0).

Argentina started the second half strongly, with a shot from Messi from the edge of the area in the 50th minute, which Ryan caught.

Argentina added the second goal in the 57th minute, after a fatal mistake by goalkeeper Ryan, who tried to dodge the duo De Paul and Alvarez, so the latter killed it and scored easily into the net.

Messi continued to lead all attacks for Argentina, with another shot from outside the penalty area in the 67th minute, which went wide of the goal.

Argentina returned to the threat in the 75th minute, with a ground shot from substitute Tagliafico from the left side of the penalty area, which passed next to the post.

And Australia succeeded in reducing the difference in the 77th minute, with a shot from Goodwin from outside the penalty area, which collided with Fernandez and changed its direction, deceiving the goalkeeper, and entered the net.

Australia almost equalized the score in the 80th minute, with Behish manipulating four players from Argentina, before shooting a ball from inside the area, which hit Lisandro Martinez’s foot and went out to a corner kick.

Hrustic followed him in the 81st minute, with a curved shot from the edge of the penalty area that went over the crossbar.

Lautaro received a through ball inside the area in the 88th minute, to hit a weak ground ball that went wide of the goal.

Argentina wasted a real opportunity to add the third goal in the 89th minute, after Messi passed a magic ball to the otaro inside the area, and Brian singled out, strangely hitting the top of the crossbar.

In a similar snapshot in the third minute of stoppage time, Messi passed another magic through to Otaru, who singled out Brian, to hit a ball that was blocked by the Australian goalkeeper.

Then Messi hit a curved ball from inside the area, which passed just past the post.