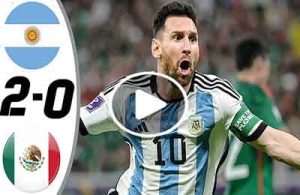 Messi conquers Mexico and restores Argentina’s luster
Argentina maintained its hopes for the World Cup in Qatar, by achieving an important victory at the expense of Mexico with two goals without a response, this evening, Saturday, at Lusail Stadium, in the second round of Group C.

Argentina scored the double, “Lionel Messi in the 64th minute and Enzo Fernandez in the 87th minute”.

Argentina raised its score to 3 points in second place, while Mexico’s balance froze at one point at the bottom of the standings.

Mexico posed the first danger in the match in the tenth minute, when Montes followed a cross from a foul, to hit the ball on the bird, which passed next to the post.

The attacking attempts by the two teams were absent in the following minutes, as strong collisions prevailed between the players.

Argentina appeared for the first time in the 34th minute, by obtaining a violation on the right side, which Messi executed with a direct shot, which Ochoa saved.

Tango dancers reappeared in the 41st minute, rising from Lautaro Martinez to a cross from Di Maria, with a header that went wide of the goal.

Mexico almost opened the scoring in the 45th minute, by obtaining a violation carried out by Vega with a powerful direct shot, Martinez excelled in stopping it.

Vega hit a powerful ball from outside the penalty area in the fifth minute of stoppage time, which went over the crossbar, to end the first half with a goalless draw.

And with the start of the second half, Argentina got a violation at the borders of the area in the 50th minute, which Messi executed with a direct shot that went over the crossbar.

Messi succeeded in opening the scoring in the 64th minute, via a missile strike from outside the penalty area that hit the net.

Tango dancers tried to add the second goal in the 70th minute, after Acuña sent a cross on the edge of the area, and Molina followed it up with a direct shot that went wide of the goal.

Argentina fired a coup de grace at Mexico by adding the second goal in the 87th minute, with a wonderful curved shot from Fernandez that hit the net, taking advantage of Messi’s pass, to end the match with Argentina winning with two goals without a response.