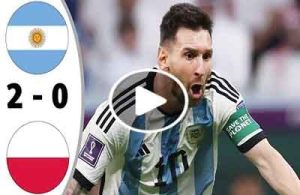 The Argentina national team defeated Poland with two goals without a response, this evening, Wednesday, at Stadium 974, at the end of the Group C matches of the “Qatar 2022” World Cup.

Argentina’s double was scored by Alexis McAllister in the 46th minute and Julian Alvarez in the 67th minute.

With that result, Argentina raised its score to 6 points at the top of the group, while Poland’s balance froze at 4 points, so that the two teams climbed together to the final price round.

And the preference was condemned for Poland in booking the qualifying ticket at the expense of the third Mexico, by a single goal difference, as the Tricolor team defeated Saudi Arabia (2-1), a result that was not sufficient to guarantee its qualification.

The first attempt in the match came in favor of Argentina in the seventh minute, with a shot from Messi from the edge of the area, which went weak in the hands of Chesney.

Messi reappeared in the tenth minute, with a shot from inside the area, Chesney shone in deflecting it for a corner kick.

Messi sent a through ball in the 17th minute inside the area, Acuna received it and hit a powerful ball that went over the crossbar.

Argentina almost opened the scoring in the 29th minute, with a powerful shot from Acuna from the left side of the penalty area, which passed just past the post.

Di Maria tried to surprise Chesney in the 33rd minute, by executing a deceptive corner, shooting a ball directly at the goal, but the Polish goalkeeper saved it.

And the Argentine creep towards Poland’s goal continued, with a curved shot from Fernandez from outside the area in the 35th minute, which went over the crossbar.

Argentina missed a real opportunity to open the scoring in the 36th minute, alone for Alvarez, who hit a powerful ball that was saved by Chesney.

And Argentina got a penalty kick in the 38th minute, due to a violent interference from Chesney on Messi in a cross ball, the referee needed to refer to the mouse technique to calculate it.

Messi executed the penalty kick, hitting a ball to the left of Chesney, who excelled in tackling it.

Alvarez searched for the opening of the scoring for Argentina in the 43rd minute, with a powerful shot from the border of the area, which was blocked by Chesney, so that the first half ended with a goalless draw.

Argentina opened the scoring early in the second half in the 46th minute, after Molina sent a cross from the right side, which McAllister followed with a direct shot from inside the area that hit the net.

Poland almost adjusted the score quickly in the 50th minute, with Glick following up a cross from a foul, hitting a header that passed just past the post.

McAllister almost wrote down the double in the 61st minute, after he followed another ground cross inside the area, hitting a ground ball that Chesney caught this time.

Argentina added the second goal in the 68th minute, after Fernandez passed the ball inside the area to Alvarez, who in turn hit a powerful ball that touched Chesney’s fingers and settled into the net.

Messi tried to write his name on the list of scorers, after he received a cross from Tagliafico inside the area, to hit a direct ball, which Chesney shone in the 72nd minute.

And the offensive flood of Argentina continued, after Messi passed a magic through to Alvarez in the 74th minute, to separate Chesney and hit a ball that passed next to the post.

Kewer made a mistake in returning the ball back to Chesney in the 86th minute, so Lautaro killed it and was alone with the Poland goalkeeper, but he strangely shot next to the post.

Tagliafico received a distinguished through ball inside the area in the third minute of stoppage time, to separate Chesney and hit a dropped ball, which Kiyoor removed from the goal line, to end the match with Argentina’s victory (2-0).