Arsenal burn Nottingham Forest with five and regain the lead 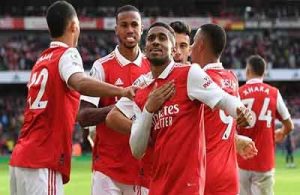 Arsenal’s balance rose with this victory to 31 points in first place, two points ahead of Manchester City, while Nottingham Forest’s balance froze at the ninth point in the last place.

Arsenal opened the scoring in the fifth minute, when Saka lifted a cross from the right, Martinelli went to it and headed it into the net.

Saka got rid of Lingard, then passed the ball to Jesus, who got rid of his sergeant, before hitting a curved ball with his left that passed by the goal in the eighth minute.

Tomiyasu went from the left side, to receive a cross from the right sent by Saka, but directed his shot over the goal in the 12th minute.