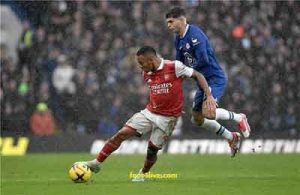 Arsenal regained the top spot in the English Premier League, with a valuable victory 1-0 against Chelsea, on Sunday afternoon, at Stamford Bridge, at the top of the 15th round matches.

Arsenal’s only goal was scored by Brazilian defender Gabriel Magallais in the 63rd minute.

With this result, Arsenal rose to the top of the table with 34 points, while Chelsea’s balance froze at 21 points in seventh place.

The first attempt in the match came in favor of Arsenal in the first minute, with a header from Gabriel passed next to the post.

Arsenal returned to the attempt in the 7th minute, with a shot from White from outside the penalty area that went wide of the goal.

White hit the ball again from inside the area in the 10th minute, and it just passed near the post.

Arsenal’s advance towards the Chelsea goal continued, with a shot from Martinelli from the edge of the area in the 17th minute, which went over the crossbar.

Arsenal missed a real chance to open the scoring in the 28th minute, after Martinelli sent a cross to Jesus, who is free of censorship inside the area, and the latter hit a header that passed next to the post.

Chelsea appeared offensively for the first time in the 32nd minute, as Silva rose to a cross from a corner kick, shooting a header that went wide of the goal.

The following minutes did not witness anything new, and the first half ended in a goalless draw.

With the start of the second half, Barty rose to a cross in the 56th minute, shooting a header that went wide of the goal.

Jesus penetrated into the right side of the penalty area in the 62nd minute, hitting a powerful ball that Mendy starred in sending it away to a corner kick.

Arsenal opened the scoring in the 63rd minute, after Saka sent a cross from a corner kick, which passed in front of everyone, and Gabriel followed it with a shot from the goal line that went into the net.

Arsenal almost added the second goal, after Saka followed a ball away from Chalobah inside the area, to hit a powerful ball that went wide of the goal in the 68th minute.

From a quick attack, Jesus launched from the midfield and manipulated Silva and Cech, before passing a ball to Odegaard inside the area in the 75th minute, and he hit a curved ball that went over the crossbar.

The attempts of the two teams in the remainder of the match did not result in anything new, and the match ended with Arsenal winning 1-0.