Arsenal defeats Liverpool and regains the top of Premier League 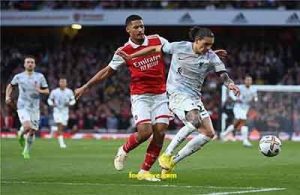 Arsenal’s balance ascend to 24 points, to regain the lead from Manchester City by one point, while Liverpool’s balance froze at 10 points in tenth place.

The start came fiery, when Martin Odegaard passed a through ball to Martinelli, who followed it with one touch into the net after just 58 seconds of kick-off.

Liverpool struggled a lot in order to reach the Arsenal penalty area, and Arnold took a corner on Van Dijk’s head, but the latter’s attempt went far from the goal.

Liverpool goalkeeper Alisson Becker did not find it difficult to stop the attempt of his compatriot Gabriel Jesus after a cross from left back Takehiro Tomiyasu.

Arsenal defender William Saliba almost scored a goal in his team’s net, when he stopped the ball before it reached Darwin Nunez, to be removed brilliantly by Ramsdale.

The Egyptian Mohamed Salah, the Liverpool star, penetrated from the right, and dribbled past two Arsenal players before hitting a rushing ball near the near post.

Liverpool finally managed to equalize the score in the 34th minute, when Colombian winger Diaz broke the offside trap, sending a pass that Nunez met in the net.

Diaz was injured and replaced by Roberto Firmino, then Arsenal regained their lead when Martinelli got rid of Arnold before passing to Saka, who met her in the net.

Joe Gomez entered the Liverpool squad instead of Arnold at half-time, but Martinelli’s quarrels continued, while Alisson intervened by saving a shot for Odegaard.

And Liverpool returned the match to zero again, when Jota passed a through ball that reached Firmino, who shot it crawling into the net in the 53rd minute.

Xhaka fired a shot from the left into the stands, after which Tomiyasu’s cross passed from everyone to reach Saka, who failed to control it to touch his hand.

Arsenal got a penalty kick after Gabriel Jesus was obstructed by Diogo Jota, and Saka took the kick, scoring the third goal in the 76th minute.

Klopp inserted his last card by involving Elliot in place of Jota, while Arsenal tightened its defense by involving Tierney in the place of Odegaard, which made the task difficult for the Reds.

The derby between Van Dijk and Alisson almost caused a reverse goal, but the Dutch defender’s header, returning from behind, crossed the side of the goal in the last minute.