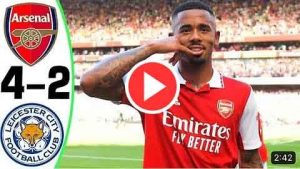 The Brazilian star and newcomer Gabriel Jesus grabbed the attention and scored two goals for the “Janners” in the first half in the 23rd and 35th minutes.

With the beginning of the second half, the guests reduced the difference after 8 minutes from its start, but with the help of friendly fire, with a goal by Frenchman William Saliba, by mistake in his own goal.

But the London team quickly expanded the difference again after two minutes through Swiss captain Granit Xhaka, then Leicester players returned to the game again with a second goal scored by James Madison in the 74th minute.

The “Foxes” were not very happy with this goal, as it was a minute enough to kill the match with Arsenal’s fourth goal through Brazilian Gabriel Martinelli.

The “Janners” snatched their second victory in a row, to share the top spot with the “Citizens” with six points.

On the other hand, the “Foxes” have not managed to seize any victory so far, after they opened their season with a draw (2-2) against Brentford.

The tie dominated the rest of the day’s matches that were held so far, as Southampton drew against its guest Leeds United (2-2) at (St. Mary’s Stadium), while the goalless draw was the master of the situation in the confrontations of Brighton and Hove Albion and Newcastle United, and Wolverhampton against Fulham. .