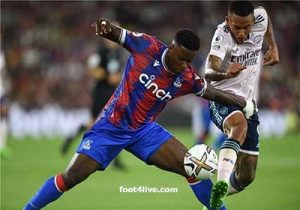 As early as the fourth minute, Arsenal threatened his host’s goal, when Jesus pounced on Zaha’s wrong pass to get rid of Doukuri, and then bounced the ball back to Martinelli, who fired away.

A shot by Zinchenko was blocked by Gueta in the eighth minute as Arsenal threatened to threaten their opponents once again. Odegaard passed the ball to Zinchenko on the left flank, who then fired a shot that was blocked by Gueta.
A goal was conceded by Crystal Palace in the 20th minute, when Saka raised a ball towards the far post, and Zinchenko met it with a strong header along the goal line, followed by Martinelli’s goal.

Despite Edward’s harassment, Aaron Ramsdale cleared the ball in time in the 28th minute after almost making a fatal mistake in dealing with Magalhaes’ pass.

After Magalhaes’ handball in the 36th minute, Palace fans demanded a penalty kick, but the referee refused.

In the 42nd minute, Ramsdale saved Edward’s follow-up to Andersen’s header from an investigator.

In the 52nd minute, Ramsdale blocked Izzy’s attempt after Zaha’s pass, which would have given Crystal Palace a chance to equalize.

In the 56th minute, a free kick was awarded to Arsenal, but it was blocked by Odegaard, who hit the near post.

During Palace’s attempt to equalize, the smell of danger disappeared after a quarter of an hour into the second half.

In the 70th minute, White passed to Saka, who was forced to shoot away from the hosts’ goal by Guihi.

In place of Zinchenko and Jesus, Mikel Arteta brought in Kieran Tierney and Eddie Nketiah.

In the 85th minute, Saka again went to the right to raise a short cross, Juhi attempted to clear it, but he accidentally scored.

A third Arsenal goal was close to being scored, in the 87th minute, when Odegaard set the ball for Saka on the right side, but Juhi blocked the latter’s effort, resulting in Arsenal’s 2-0 win.