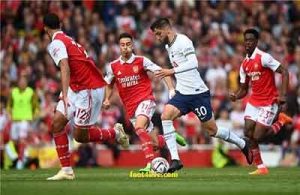 Arsenal stay on the top for a new round, after the north London derby was decided by its guest Tottenham 3-1 on Saturday evening, at the opening of the ninth round of the English Premier League.

Arsenal’s goals were scored by Thomas Partey (20), Gabriel Jesus (49) and Granit Xhaka (67), while Harry Kane scored Tottenham’s only goal from a penalty kick (31).

Arsenal’s balance rose with this victory to 21 points, topping the standings, 4 points ahead of Manchester City, who plays Sunday against Manchester United, while Tottenham’s balance froze at 17 points in third place.

Arsenal missed an early opportunity in the third minute, when Saka got rid of Perisic, before sending a cross from the right, which reached Martinelli, who shot it “half a plane”, to hit Richardson and bounce off the post.

Tottenham responded in the 13th minute, when Son took a free kick into the penalty area, Richarlison tried to follow it with his foot, but goalkeeper Aaron Ramsdale was on the lookout for his attempt.

Barty passed the ball to Xhaka, who shot from the outskirts of the penalty area, a low ball that passed just outside the goal in the 17th minute.

Barty opened the scoring for Arsenal in the 20th minute, when the back White’s pass reached him, to hit the ball directly to the left of goalkeeper Hugo Lloris.

Tottenham tried to respond quickly, and Son passed to Perisic, who created the space for himself before hitting the side net from outside in the 28th minute.

The referee awarded a penalty kick in favor of Tottenham, after Richarlison was fouled by Magalhaes, and Kane successfully executed the kick in the 31st minute.

Tottenham launched a counterattack in the 38th minute, after which Perisic raised a cross, which Kane rose and headed into the hands of goalkeeper Ramsdale.

Two minutes before the end of the original time of the first half, Arsenal almost regained their lead, when Jesus got Odegaard’s pass on the left side, to make his way between three defenders and hit a shot that goalkeeper Lloris was spared.

Arsenal managed to advance again in the 49th minute, when Lloris saved Saka’s shot, and Romero tried to clear the ball, but he returned it by mistake to the goalkeeper, to pass through the hands of the latter, and Jesus completed it in the empty net.

White rejected a cross from Yemen, which Jesus rose to, without directing his header towards the goal in the 53rd minute.

Tottenham have played minus the ranks since the 63rd minute, after Royal received a red card, after he was obstructed by Martinelli, and four minutes later, Arsenal added the third goal, when Xhaka received Martinelli’s pass, to follow a crawling ball away from the goalkeeper’s reach.

Tottenham made substitutions, which included Oliver Skipp, Matt Doherty, Ryan Sessegnon, Yves Bisoma and Davinson Sanchez, with the aim of achieving the lost balance, while Arsenal removed its striker Jesus, captain Odegaard, and replaced them with Eddie Nketiah and Fabio Vieira.

Martinelli failed to take advantage of a cross from Saka towards the far post in the 82nd minute, then Arsenal’s substitute Kieran Tierney advanced with the ball, before firing a brilliant shot by Lloris to eliminate her danger in the last minute.