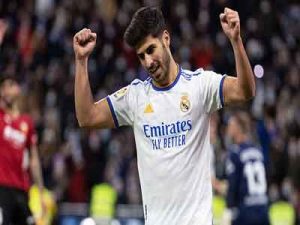 Real Madrid coach Carlo Ancelotti revealed developments regarding the future of Meringue player Marco Asensio, who is surrounded by speculation of leaving, during the current summer Mercato.

“Marco is looking at the offers made to him, to see if he can leave,” Ancelotti said during his statements to the Spanish network Relevo on the sidelines of the European Football Association (UEFA) awards ceremony.

He added, “If he does not leave, he will remain a Real Madrid player and I will rely on him.”

The name of Asensio, the 26-year-old, was linked in the past hours to leaving Real Madrid, in light of Manchester United’s interest in joining him for 30 million euros, along with many English and Italian clubs.

There was only one year left in Asensio’s contract with Real Madrid, and despite Ancelotti’s insistence on staying with the Royal, the club’s management showed its willingness to agree to his departure if it received an appropriate financial offer.