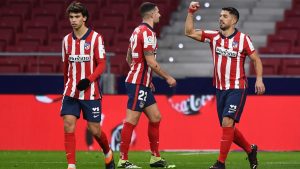 Atlético Madrid will look in today’s meeting to achieve victory and return to the path of victory after the recent stumble against Porto in the group stage of the Champions League. To collect the three points in order to advance in the La Liga standings and continue the competition for the championship title that the team seeks to retain.

Atlético Madrid is currently in third place with 10 points, after winning three matches, drawing one, and the team has not lost any match. The team scored 7 goals and conceded 4 goals.

On the other hand, Athletic Bilbao seeks in today’s meeting to continue the series of victories and achieve the third victory in a row, after beating Celta Vigo in the previous round with a goal without a response, before beating Real Mallorca with two goals without a response in the last round, and the team will look to walk on The right way and moving forward in the championship standings.

Athletic Bilbao is currently fifth in the championship standings with 8 points, after winning two games, drawing two games, and was unbeaten in any meeting, and the team scored 4 goals and conceded one goal.