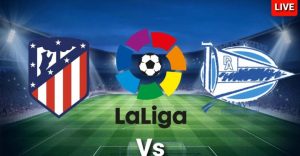 The Atlético Madrid team is back on the right track towards retaining the La Liga title. The Madrid team beat Getafe in the last round with two goals against a goal in a match that was intense and exciting and did not end except in the last seconds of the meeting, and the team will look in today’s meeting for the three points in order to chase The summit and preserving the chances of catching Real Madrid, who finished first. Atletico Madrid will face a fiery challenge before the end of this week against AC Milan in the Champions League, and it must win today’s meeting and avoid injuries before the clash of the next match.

Atlético Madrid is in second place in the La Liga standings with 14 points, after winning 4 matches, drawing 2 matches, and has not suffered any defeat so far, scoring 9 goals and conceding 5 goals.

On the other hand, we see that Alaves is playing today’s meeting with low spirits after the defeat in the last round against Espanyol with a goal without a response, and the team will look in today’s meeting for the three points in order to improve its position in the league table, especially since the team is suffering greatly this season and its position has become difficult. Very much in the La Liga ranking table, and any negative result in today’s meeting will worsen the team’s position even more in the round of the league.

Alaves enters today’s meeting in the last place without a balance of points, after losing 5 matches and not drawing in any meeting, scoring one goal and conceding 11 goals.