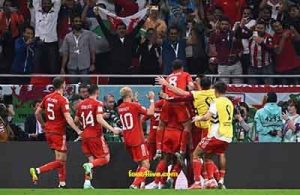 The Welsh national team snatched a valuable draw against the United States of America, with a goal for each team, in the match that brought them together today, Monday, at the Ahmed bin Ali Al-Mondial Stadium, in the World Cup, group stage’s first round .

Timothy Weah took the lead for the United States in the 36th minute, while Gareth Bale equalized for the Welsh national team from a penalty kick in the 82nd minute.

With this tie, both teams scored one point in second and third places, behind leaders England (3 points), and the Iranian team is at the bottom of the standings without points.

The match began with the United States dominating the ball, while the first opportunity came in the ninth minute, after a cross from Timothy Weah from the right, defender Rondon almost accidentally put it into his own net after he met the cross with a wrong header, which goalkeeper Hennessey managed to clear.

The ball rebounded and returned to the American team on the left side of Pulisic, who passed a cross that Robinson met with an excellent header, which passed next to the right post of the Welsh national team’s goal.

As for the Welsh national team, it tried to reach goalkeeper Turner’s goal, and from a free kick that was carried out inside the area in the 14th minute, it was dispersed by the American defense to reach Ethan Empado, who fired a powerful shot, but it passed higher than the crossbar.

And in the 36th minute, Timothy Weah managed to score the first goal of the match for the US national team, after an excellent ball passed by Pulisic in the depths hit the Welsh defense, so Weah singled the goal and hit the ground ball the moment the goalkeeper left his goal and passed into the net.

In the 44th minute of the first half, the Welsh national team got a corner that was executed by Aaron Ramsey inside the area, to be met by defender Ben Davies with a header that passed next to the post.

In contrast to the beginning of the first half, the second half witnessed the Welsh team’s control and possession of the ball, but without much danger to the US goal at the beginning.

And in the 64th minute, there was an excellent opportunity for the Welsh national team to adjust the score after dispersing the ball from the player of the two teams, to finally reach Ben Davies, who turned it with a header that almost hit the net had it not been for the ingenuity of the goalkeeper, who turned it into a corner.

In the corner, the striker, who replaced Kiefer Moore, missed the most dangerous chance of the match after the corner was executed inside the area at the near corner, to be met by Moore with an excellent header from within the six yards the moment the goalkeeper left, but it crossed the crossbar to pass out of the field.

Substitute Brendan Aaronson almost added a second goal for the US team after a corner was carried out inside the area to reach the far post, and Aaronson followed it up with a header that passed near the left post in the 76th minute.

Gareth Bale got a penalty kick for his country after he was fouled inside the area by defender Zimmermann. Bale fired a shot to the left of the goalkeeper, who failed to save it, and Bale tied the score for Wales in the 82nd minute.

In the 89th minute, Bernan Johnson almost killed the match with a second goal for Wales, after the player kicked off and penetrated towards the penalty area, but fired a weak shot that reached the arms of goalkeeper Turner.

And in the 90 + 10 minute, Kylin Acosta prevented a goal after the American goalkeeper left his goal before the middle of the field to scatter a ball to the middle of the field, and Bell received it, who almost hit a cross-continental ball, taking advantage of the goalkeeper’s departure, before Acosta committed a mistake in which he received a yellow card and ended with it. the match.