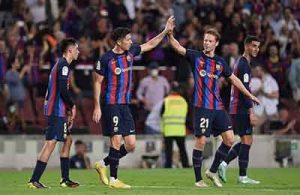 Barcelona won a wide victory (4-0) against Athletic Bilbao, on Sunday evening, in the La Liga, 11th round , in the Blaugrana stronghold “Spotify Camp Nou”.

With this victory, Barcelona raised its score to 28 points, in second place in the La Liga standings, 3 points behind leaders Real Madrid, while Athletic Bilbao froze at 18 points in sixth place.

Ousmane Dembele scored the goal quickly, in the 12th minute, when he hit a ball that was saved by goalkeeper Unai Simon, to bounce back to Lewandowski, who sent a cross into the area, and reached Dembele again to direct a header to the bottom right of the goalkeeper.

Roberto added the second goal for Barca, in the 18th minute, after receiving a pass from Dembele and penetrating the penalty area, before hitting a powerful ball to the left of the goal.

The Catalan pressure continued, so that Robert Lewandowski scored the third goal for the Blaugrana, in the 22nd minute, after a ball arrived from Dembele inside the penalty area, to turn around and then put it directly into the net.

Barcelona midfielder Jaffe fell and complained of a muscle injury, after a violent intervention by Athletic Bilbao player Danny Garcia, in the 32nd minute, so that Barca coach Xavi Hernandez decided to withdraw the young Spaniard and push Ivorian Frank Kessie instead.

The first threat came from Athletic Bilbao in the 48th minute, with a shot from Berenger from the edge of the penalty area, easily caught by Marc ter Stegen, Barcelona goalkeeper.

In the second half, Sergi Roberto ran on the right side and passed a cross into the penalty area. Bilbao defender Danny Garcia tried to clear it, hitting Barca’s Pedri and then hitting the right post in the 54th minute.

Fati almost scored Barcelona’s fourth goal, in the 65th minute, with a shot from inside the penalty area, which passed over goalkeeper Unai Simon.

Ferran Torres concluded the goal celebration, in the 73rd minute, after receiving a pass from Ousmane Dembele inside the penalty area, to hit the ball between the feet of the Basque goalkeeper.

Sergio Roberto fell to the ground, after suffering a severe shoulder injury, to be taken off the field in the 85th minute.

Barcelona had exhausted his five changes at the time, which made him complete the match incomplete.

Ter Stegen almost cost his team a goal with a naive mistake, which Bilbao players failed to take advantage of in the 89th minute, and the confrontation ended with the hosts winning 4-0.