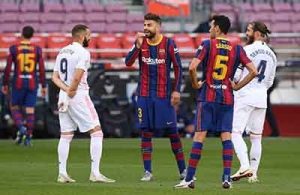 The Medical tests carried out today, Wednesday, confirmed that Hector Bellerin, the Barcelona right back , ​​had an injury to the soleus muscle of the left leg.

The medical staff of the Catalan club announced that the Spanish player will be absent from playing for an unspecified period, explaining that based on the development of his condition, his readiness to participate in the upcoming matches of Barca will be determined.

According to the Spanish newspaper, Mundo Deportivo, Bellerin will be absent for a period of 3 to 4 weeks, to ensure that he does not catch up with the Clasico meeting scheduled for October 16.

Bellerin had felt troubles in the soleus muscles of his left leg during Barcelona’s training session on Tuesday.

The absence of Bellerin is added to the list of those absent from playing with Barca for injury, and it includes the Dutch Memphis Depay and Frenkie de Jong, the Uruguayan Ronald Araujo and the French Jules Conde, who were injured with their national teams.