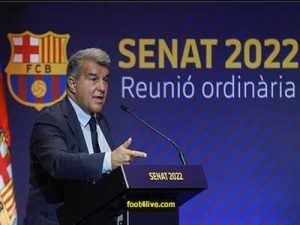 Barcelona has sold off a further 15 percent of the club’s La Liga broadcasting rights to Sixth Street, a global investment firm.

In June, Barca confirmed that 10 percent of its TV rights had been sold to Sixth Street.

The company has now increased its investment in the club.

Sixth Street will now receive 25 percent of the club’s TV rights for the next 25 years, as Barca aims to appease their financial issues.

“We continue to move forward on our strategy and are pleased to have completed this additional agreement with Sixth Street providing us with a meaningful increase in capital strength.

“Over the past few weeks, we and Sixth Street have engaged and collaborated with a shared understanding of what we are seeking to achieve for our organisation, and we look forward to our long-term partnership.”

“FC Barcelona is one of the world’s premier sporting organisations.

We are glad to be expanding our relationship through this additional investment.

“Our flexibility and cross-platform expertise continue to be of value to management teams when seeking to execute highly strategic initiatives.

“Barca have required an influx of cash in order to boost Xavi’s squad ahead of the 2022-23 campaign.

While Franck Kessie and Andreas Christensen arrived on free transfers.

Barca have spent big on Raphinha and Robert Lewandowski, with the duo arriving over the course of the last two weeks in deals worth around a combined EUR100 million ($102 million), according to reports.

Barca face rivals Real Madrid in a friendly in Las Vegas on Saturday.