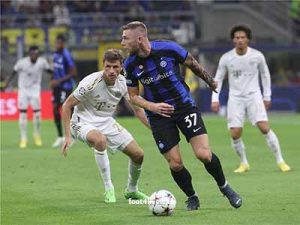 Bayern Munich did not find difficult to win away from home at the expense of Inter Milan (2-0), on Wednesday evening, at the start of its campaign in the Champions League groups.

German winger Leroy Sane played a decisive role in the Bavarian victory after he scored the first goal in the 25th minute and contributed in the second, which Danilo D’Ambrosio converted by mistake in his team’s goal in the 66th minute.

The victory gave Bayern Munich the first 3 points, to occupy second place in Group C, behind Barcelona on goal difference, while Inter finished third without points.

The Bavarian team was the initiator of the threat through a creeping ground shot by Kimmich, but it settled in the arms of Onana, who returned a few seconds later to confront another attempt by the same player.

Inter arrived at the first opportunity to score giant goalkeeper Manuel Neuer from a pass received by Martinez, to penetrate into the penalty area, but his shot went in front of the goal.

The Cameroonian goalkeeper continued his successive response to a barrage of Bavarian shots, most notably from Kimmich and Muller, to prevent the guests from shaking his net until the middle of the first half.

Bayern Munich hit the Inter defense with a long pass sent by Kimmich towards Sani, who received the ball and easily dodged Onana before putting the ball into the net, scoring the goal.

Inter almost equalized through Dzeko’s header, which passed next to the post, before Onana continued to save the hosts when he blocked Koman’s shot, ending the first half with Bayern’s lead (1-0).

At the beginning of the second half, Dzeko missed the opportunity of a real goal, after a ball reached him near the goal, but he directed it with a weak shot, which the giant Manuel Neuer caught easily.

Bayern managed to consolidate its progress with another goal after a wonderful technical sentence between Sani and Koeman, before the first shot with the body of one of the defenders, to turn into the net with friendly fire.

Correa missed a real chance to reduce the result for the Nerazzurri after he received a ball by mistake from Hernandez inside the penalty area, but he shot it strangely far from the goal.

The last minutes witnessed successive Bavarian attacks, but the guest players dealt recklessly with most of the chances, so that Bayern Munich was satisfied with winning with only two goals.