Bayern Munich beats Mainz 6-2 and pounces on the lead 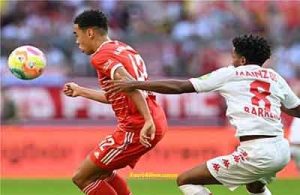 Bayern Munich won a landslide victory against Mainz (6-2) at the Allianz Arena, today, Saturday, in the German League the 12th round .

The victory gave Bayern the opportunity to pounce on the lead temporarily by reaching the 25th point, surpassing Union Berlin by two points, while Mainz stopped at 18 points in eighth place.

The hosts did not wait long to threaten goalkeeper Robin Zentner, and Gnabry managed to hit the net with an early goal within 5 minutes after receiving a cross pass from Mane, the German set it up for himself and then shot it into the goal.

The danger of Mainz appeared early, too, with a shot from Onisio from inside the penalty area, but Ulrich turned it into a corner.

Bayern continued their quest to consolidate their progress until Musila managed to add a second goal with a creeping shot into the net in the 28th minute, after exchanging the ball with Chubu Moting.

The team almost reduced the score with a lightning touch through Burkart, but the ball hit the crossbar before Lee followed up with a ground shot that hit the post.

Mane penetrated the penalty area from the left side, but fell after a collision with one of the defenders, demanding a penalty in his favour.

The referee decided to review the shot through the “mouse” video technology, and awarded a penalty kick to the owners of the land, carried out by the Senegalese star, but goalkeeper Zentner successfully confronted it, before it was rebounded to Mane, who deposited it in the net.

In the last moments before the end of the first half, Burkart fell inside the Bayern penalty area after colliding with goalkeeper Ulrich, so a penalty kick was awarded to Mainz after reviewing the “mouse”, and Burkart executed it strangely, as he shot in the middle of the goal, and the Bayern goalkeeper turned it into a corner.

Mainz took advantage of the corner, compensating for the missed kick, as Widmer rose to Martin’s cross, heading the ball with his head into the net, ending the first half with a 3-1 lead by Bayern.

The first minutes of the second half almost resulted in a fourth goal for Bayern through Chubu Moting, but the post was on the lookout for his shot.

Mane kicked a ball on the left side, sending a perfect cross towards Goretzka, who rose to it and headed the ball into the net, consolidating Bayern’s advance with a fourth goal.

Chubo Moting continued his attempts to participate in the Bavarian goal party with a left-footed shot from the center of the penalty area, with the Mainz goalkeeper on the lookout.

And in the 76th minute, Bayern coach Julian Nagelsmann pushed young striker Mattis Till instead of Mane, to reward him immediately after 3 minutes with a goal with a ground shot that hit the leg of one of the defenders and turned into the net.

Ulrich made a fatal mistake by passing the ball to one of the Mainz players, so substitute Ingvarsten was able to reduce the score for the visitors.

4 minutes before the end of the original time, Chubu Moting broke his nose by signing the sixth goal of the Bavarian team after receiving a pass from Koeman, which was met by Al-Kami.