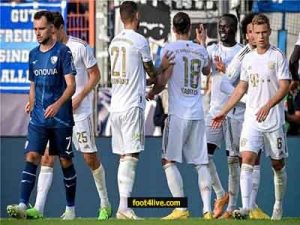 Bayern Munich beats Bochum (7-0), today, Sunday, in a match that brought them together in the third round of the German League.

Bayern needed a short time to threaten the hosts’ goal, as Sani managed to hit the net with the first goal with a right shot inside the penalty area, just 4 minutes after the start of the match.

The response almost came quickly with a shot on the bird from Zoller, but De Ligt intervened in time and blocked the ball with his body, which turned into a corner.

Sani reappeared with a long-range missile shot, which almost hit the net, had it not been for the ingenuity of goalkeeper Rayman, who turned it with his hand into a corner.

Sane did not stop his attempts and penetrated into the penalty area with his speed until he approached the goal, but he sent the ball strangely into the stands.

Lucilla missed the opportunity to equalize with Bochum after receiving a silk pass inside the penalty area, but he threw the ball over the goal.

The guests punished the Bochum team for the missed opportunity after Kimmich’s corner towards De Ligt, who headed the ball into the net, reinforcing his team’s progress after verifying its validity via video technology.

The owners of the land did not stop trying, a cross hit the head of Hoffman, who tried to direct it towards the net, but it went easy in the hands of Manoir Neuer.

But that did not prevent Bayern from strengthening its lead with a third goal after a fatal defensive error from Bochum, and the ball eventually reached Koeman, who met it with one touch into the net.

5 minutes before the end of the first half, Koeman hit a ball that hit the post before it bounced into Mane’s body and turned into the net, but the referee canceled the goal after reviewing the video technology of the ball colliding with the Senegalese player.

Nevertheless, Mane compensated for that within two minutes after receiving a through pass, to launch the ball towards the penalty area before evading two defenders and then hit a creeping floor, which resulted in a fourth goal for the visitors.

A few minutes after the start of the second half, Sani penetrated the penalty area before passing a cross to Kimmich, coming from behind, but the latter hit the ball hard over the crossbar.

Koeman managed to extract one of the balls before the Bochum defender reached it, to hit a creeping floor that passed next to the post, before depriving the goalkeeper of the owners of the land, Sani, from a unique goal with his brilliant save.

The referee then awarded a penalty kick in favor of Bayern after reviewing the “mouse”, as it was found that one of the defenders of Koeman had obstructed her, so that Mane, who shot it strongly into the net, scored the second goal for him and the fifth for his team.

After coming off a few minutes, Gnabry sent a silk through pass towards Sani, who was on his way to be alone with the Bochum goalkeeper, but defender Gamboa pushed the ball away from him, but it went wrongly towards the net, scoring Bayern’s sixth goal with friendly fire.

Stoeger shot the ball towards Bayern’s penalty area, firing a powerful left-footed shot, but it passed next to the post.

Janabri succeeded in making his mark in the meeting after receiving a ball on the right side of the penalty area, to launch a powerful ground shot, which hit the post and turned into the net.

Neuer scored brilliantly after blocking a close shot that almost resulted in a first goal for the home owners, to keep his net clean until the end of the match, with his team’s victory with seven.

Finf all Soccer news at esoccer.news