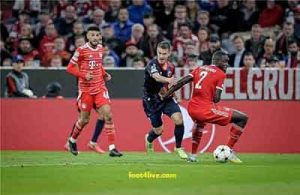 Bayern Munich maintained its full score in the European Champions League, group stage with a broad victory over its guest, Viktoria Plzen, the Czech Republic (5-0), today, Tuesday, in the third round.

With this result, Bayern strengthened its lead in the third group by reaching 9 points, while Plzen continued to the bottom of the standings without points.

The Bavarian team sent an early warning message to its guest by hitting his net with a first goal, just 7 minutes after the start of the match, from a missile shot fired by Sani from outside the penalty area.

No sooner did Plzen wake up from the early blow until he received another through Gnabry, who received a pass from Goretzka inside the area, to put the ball into the far right corner of goalkeeper Marian Fordon’s goal.

Mane appeared for the first time two minutes after the second goal, but he directed a weak shot that settled in the arms of the guests’ goalkeeper.

At the halfway point of the first half, Mane did a unique individual action, penetrating into the Plzen penalty area before putting the ball into the net, consolidating Bayern’s progress with a third goal.

The guest goalkeeper blocked a dangerous opportunity from Mosila, who was close to adding the fourth goal, before he realized what he wanted minutes later after receiving a cross inside the area, to turn it into the net.

But Musila’s joy with the goal did not last long, after the referee canceled the goal after using video technology, which proved the presence of the German player in offside, so Bayern went to the break with a three-point lead without a response.

At the beginning of the second half, coach Julian Nagelsmann made two early substitutions by inserting Stanicic in place of Davies, while Chubu Moting pushed at the expense of Musila.

Mane tried again to catch Plzen’s nets with another shot from the edge of the area, but it went towards the goalkeeper’s position, who grabbed his ball easily.
Then, the Senegalese winger sent a superb cross pass towards Sane, who accepted the gift and turned the ball into the net, scoring his second and fourth goal for his team.

Substitute Chubu Moting did not miss the opportunity to participate in the goal party after receiving a pass from Goretzka, to make way for himself to put the ball into the net, scoring the fifth goal.

Bayern did not stop after the five-way attempt to consolidate the progress with a sixth goal, but they took turns to waste some chances in the following minutes, most notably a start from Gnabry that ended with a creeping ground shot that went off the goal.

Substitute Sabitzer tried his luck with a long-range missile shot, but the ball went to the middle of the goal, where the Czech goalkeeper was, who pushed it away with his fists.