Bayern prepares for Barcelona with a draw against Stuttgart 2-2 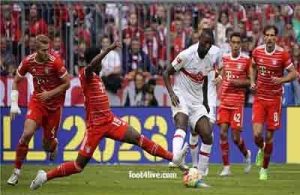 Bayern Munich fell into a draw for the third consecutive round of the German League, after Stuttgart snatched a point in the killer time by drawing (2-2), today, Saturday, in the sixth round.

The double of the Bavarian team came from the feet of the young duo Mathis Till and Jamal Musila (36 and 60 minutes), while Chris Vohrech scored the first goal of Stuttgart (57 minutes), before Ciro Guirassi added the equalizer in the deadly time (92 + 2).

Despite the draw, Bayern temporarily returned to the top with 12 points, while Stuttgart reached 5 points in thirteenth place.

Bayern’s squad witnessed some changes before facing Barcelona in the Champions League, as coach Julian Nagelsmann preferred to rest some elements, led by Sadio Mane.

The danger was absent from both goals in the first quarter of an hour until Kimmich took a free kick from a distance, with a powerful shot that crossed the crossbar.

Gnabry was close to catching the visitors’ net with a shot near the goal had it not been for the ingenuity of goalkeeper Muller, who saved the ball twice.

Bayern intensified its attacks after that, until it achieved its goal 9 minutes before the end of the first half, after a cross from Davis towards Teal, who met it with a left shot that settled into the net.

The owners of the land maintained their lead with a goal without a response until the end of the first half.

A few minutes after the start of the second half, Kimmich made a fatal mistake inside the penalty area by slowing the ball down, to be taken away by substitute Fuhresh, who immediately passed it to his colleague Guirassi, to put the latter in the net easily.

Bayern players objected to the goal due to a handicap in favor of Kimmich, so the referee went to review the shot through the video technology youth, to cancel the goal and count a violation for the owners of the land.

But the referee’s decision did not prevent Stuttgart from returning, minutes later, to shake Neuer’s net again through substitute Vohritch, who received a ball inside the penalty area, before hitting his right in the far right corner of the Bavarian goalkeeper, equalizing the result for the visitors.

After the match ignited, Bayern increased its excitement by succeeding in advancing again 3 minutes after the Stuttgart equalizer, through a ground shot in the far left corner, fired by Musila.

Gnabry almost consolidated the progress of the Bavarians with a third goal after he found himself face to face with the Stuttgart goalkeeper, who defended his goal brilliantly, to deprive the German winger of a real opportunity.

And the referee returned to cancel another goal for Stuttgart without resorting to video technology, after he charged a violation in favor of Kimmich after a clear obstruction of the German player on the edge of the penalty area before turning the ball into the net.

Bayern received a fatal blow in the last minutes of the match after the referee awarded a penalty kick in favor of the guests after using the “mouse”, as it was found that there was a violation of Matthias de Ligt against the Stuttgart striker.

Guirassi executed the penalty perfectly, hitting a powerful ball to the left of Neuer, who froze in place unable to try to stop the kick, to equalize Stuttgart the result in the deadly time.