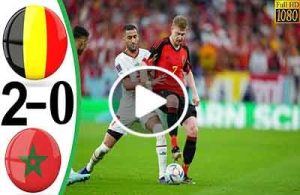 The Moroccan national team defeated its Belgian counterpart (2-0) in the match that took place at Al-Thumama Stadium, today, Sunday, in the second round of the Group Six competitions in the Qatar World Cup 2022.

The Lions’ double was scored by Abdel Hamid Sabry in the 73rd minute, and Zakaria Abu Khalil in the minute (90 + 2).

The Moroccan national team raised its score to 4 points at the top of the group, and is close to qualifying for the next round, while the Red Devils’ balance froze at 3 points.

The two teams started the match without introduction, as Hakim Ziyech got the ball and passed it to Youssef Al-Nusairi in the operations box, but goalkeeper Thibaut Courtois intervened and saved his goal.

The fourth minute witnessed a dangerous opportunity for Belgium after Michy Batshuayi singled out goalkeeper Munir Al-Mohammadi, but the latter successfully intervened and blocked the shot.

Thomas Meunier did not take advantage of Salim Amlah’s mistake on the operations square line, where he hit hard, but goalkeeper Al-Mohammadi saved the ball again.

A kind of confusion appeared on the Moroccan national team’s performance, leaving the initiative to Belgium, but without a significant step on the Lions’ goal.

In an organized attack by Morocco, the ball reached Ashraf Hakimi inside the penalty area, to shoot hard, but his ball went over the Belgian goal.

Moments before the end of the first half, Ziyash scored a goal for Morocco from a direct free kick, but the referee canceled it after returning to video technology due to the infiltration of captain Ghanem Sayes, who interfered in the game.

With the start of the second half, Ziyash threatened Belgium’s goal with a powerful shot, which Courtois blocked, and Hazard responded in the same way, but goalkeeper Al-Mohammadi saved the situation.

The wings were the source of the Moroccan national team’s attacks, as Sofiane Boufal slipped from the left side, and almost scored a goal with a shot, but it passed next to the left post.

In the 66th minute, Morocco coach Walid Regraki activated his ranks, brought out the injured Ashraf Hakimi and Sofiane Boufal, and pushed the duo Yahya Atiyatallah and Zakaria Abu Khalil.

The Belgian national team tried to raise its pace and play more quickly, but the spread of the lions on the field was good.

In the 73rd minute, Al-Rakraki fielded the duo, Abd Al-Razzaq Hamdallah and Abd Al-Hamid Sabry, instead of Al-Nusairi and Boufal.

And from the first touch of Sabry, he scored the goal that led Al-Aswad in the 74th minute, with a direct free kick on the left side, which he hit directly into the net.

The Belgian national team pressed hard in the remaining minutes, amid the Moroccan players’ arrogance in defense, while relying on counter-attacks.

In stoppage time, Ziyash received a ball that penetrated into the Belgium penalty area and passed to Abu Khalil, who added the second goal with a powerful shot, to confirm the victory of the Lions.