Benzema adds a special number to the Bernabeu Clasico 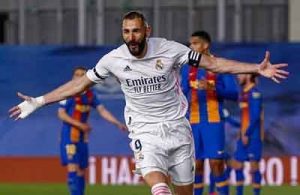 Real Madrid’s striker Karim Benzema scored a special number during the Clasico against traditional rivals Barcelona, ​​on Sunday evening, in the ninth round of La Liga at the Meringue stronghold “Santiago Bernabeu”, which ended for Meringue (3-1).

Benzema scored the first goal for Real Madrid in the 12th minute, then Fede Valverde added the second goal, and Rodrigo the third, while Ferran Torres scored Barcelona’s goal.

According to the “Opta” statistics network, Benzema scored his goal in the 11:27 minute, which is the fastest goal for Real Madrid against Barcelona in the Clasico La Liga matches at the “Santiago Bernabeu”, since his goal in March 2013, which came in the minute (5:36), The match ended with the victory of Meringue (2-1).