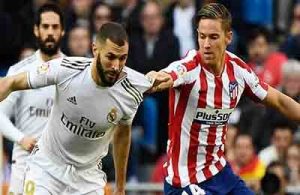 French striker Karim Benzema continued to be absent from Real Madrid’s training three days before the derby match in the Spanish capital against Atletico Madrid.

sources from the Royal Club told to the Spanish news agency, “He will not be able to catch this match.”

The French striker did not appear on the grass with the return of Real Madrid to training after the victory over Leipzig (2-0) in the second round of the group stage of the Champions League, and he continued his recovery plan inside the sports facilities.

From the beginning, the medical staff considered that the appropriate date for Benzema to return to play is the second of next October, with the use of the pause period for international commitments to fully recover, especially since he will not join the French national team during this period.

But with his condition developing well, there was hope that the French striker could catch up with the derby scheduled for next Sunday at Civitas Metropolitano.

Italian coach Carlo Ancelotti left the door open to the possibility of Benzema participating in the face of Atletico Madrid, and confirmed after the victory over Leipzig that “the strategy on Karim has not changed.”

And he added: “We will see in the next few days whether he will train or not, but as I said, we will not take any risks. If he trains well on Saturday, he will play on Sunday.”

For now, Benzema is still far from joining group training, having not even started training alone on the grass as the last step in his recovery plan, and is currently limited to performing upper body strength exercises in the gym, in the pool and with therapists. the physical.