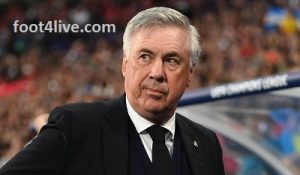 Real Madrid coach Carlo Ancelotti confirmed that his team will fight to win the European Super Cup at the expense of Eintracht Frankfurt, tomorrow, Wednesday, as well as all competitions during the new season.

“I watched Eintracht’s match against Bayern Munich, a team that deserved to win the European League, where they faced very strong teams, they are dynamic and we know them well,” Ancelotti said, during the introductory press conference on Tuesday.

He added, “To win, we have to fight and play well, we are prepared and confident in ourselves, and winning the Champions League gave us hope, and we want to continue our achievements.”

“We will do everything possible to win all the championships, I have a very good team and have my confidence, we will compete and fight.”

He explained: “Winning is always a special thing, and if we win I am happy, and if we lose I will be sad, and the statistics are not that important.”

He continued, “I think we have signed two players who have improved the team on a technical and physical level (Rudiger and Swamini), and the harmony between young people and old players was one of the keys to last year’s victories.”

Benzema Replacements in the team?

He added, “We have a lot of players in the attack line, such as Benzema, Mariano, Hazard, Asensio, and Rodrygo, and certainly when you lack the best striker in the world, this affects the team, but Benzema compensated correctly, and we have alternative solutions.”

He continued: “We did not win the Champions League with only 11 players, but there were those who deserved to play, but tomorrow I will put the team that won the title, with two or three players in doubt.”

And he noted: “Yes, I think last season was the best in my career, and I was never able to win the League and the Champions League together, and the players did it with a wonderful mixture of spirit, behavior, experience and enthusiasm from the youth, and these factors helped us win against big teams.”

Finally, : “This is my first time in Helsinki, which is a very beautiful city and similar to Canada, and we will play in a historic stadium, and there will be many Eintracht Frankfurt fans, and also Real Madrid fans, and everyone will be in white, so we can believe that the stadium It’s all with Real Madrid.”

You may like to read: striker Karim Benzema: A big change when Cristiano Ronaldo left!