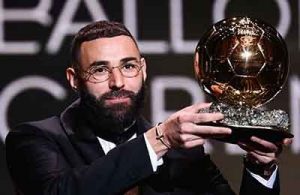 Real Madrid’s striker Karim Benzema won the Ballon d’Or for the best player in the world for the last season (2021-2022), Monday evening, during a ceremony held in the French capital, Paris.

Benzema made an exceptional performance last season, and led Real Madrid to win the League and Champions League titles, as well as crowning the European Nations League with the French roosters.

This is the first time that Benzema has won the Ballon d’Or, since the beginning of his career with the round witch, and the award was handed to him by the French legend and former Real Madrid coach Zinedine Zidane.

Benzema surpassed many football stars who competed with him to win the award this year, led by Mohamed Salah, Sadio Mane and Thibaut Courtois.

It is noteworthy that the Argentine Lionel Messi, the star of Paris Saint-Germain, was the one who won the award last year, knowing that he held the record for winning the Ballon d’Or 7 times.