Benzema wins the European Player of the Year award 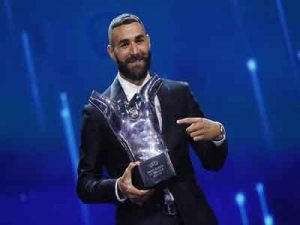 Real Madrid’s French striker Karim Benzema was crowned the best player in Europe during the ceremony held in Istanbul, Turkey, on the sidelines of the draw for the Champions League for the 2022-2023 season.

Benzema had an exceptional season, in which he led Real Madrid, to win the Spanish League and the European Champions League, and he also won the top scorer award in both tournaments.

The French star won the award, beating the duo, goalkeeper Thibaut Courtois, his colleague in the Royal Club, and Kevin De Bruyne, the Manchester City midfielder.

This is the first time that Benzema has won the European Player of the Year award, given that it was launched in 2011.