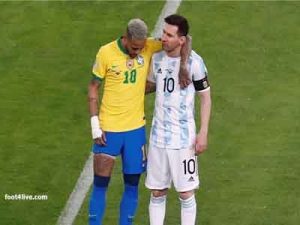 Brazil to oppose FIFA demand to replay Argentina WC qualifier :
It appears that Brazil are not looking forward to playing Argentina in the suspended World Cup qualifier due to the risks ahead of Qatar 2022, which is expected to be decided by the Court for Arbitration of Sport (CAS) later in August.

Although Brazilian health officials objected to the participation of four Argentinian players who they claimed broke quarantine rules, the Selecao, along with the Albiceleste, qualified comfortably for Qatar 2022 despite the match being halted after six minutes in Sao Paulo in September.

The Argentinian players subsequently walked off the pitch amid the chaos as officials sensationally entered the pitch to remove those four players. FIFA fined both national bodies and insisted on completing the qualifier regardless of its significance.

Brazil Football Confederation (CBF) and Argentine Football Association (AFA) took the case to the CAS, which will rule later this month. FIFA has not set a date for the fixture, but it is expected to take place in September.

A possible Argentinian boycott and the risk of injury and suspension made the national team reluctant to play the fixture two months out from the World Cup, said CBF president Ednaldo Rodrigues. Our priority is to win a sixth World Cup in Qatar, and I’ll make every effort to answer the request of our coaching staff,” Rodrigues said in a statement. “We will contact FIFA so this match does not take place.” If that match is not recommended by the coaching staff of the Selecao, we will work to have it cancelled.”