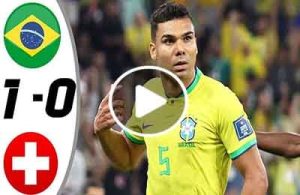 The Brazilian national team snatched a difficult victory from its Swiss counterpart, 1-0, in the match that brought them together today, Monday, at Stadium 974, in the second round of the group stage of the World Cup (Qatar 2022).

The Selecao owes this victory to Casemiro, who scored the only goal of the match, in the 83rd minute.

Samba raised its score to 6 points at the top of Group G, to officially qualify for the final price, while Switzerland’s balance stuck at 3 points, ahead of Serbia (1) and Cameroon (1).

The beginning came quietly from both sides, amid the confinement of play in the middle of the field and on the wings, with the Swiss team retreating to close the spaces in front of the samba players.

And in the 12th minute, Lucas Paqueta passed a ball in a wonderful way (with the heel) that hit the Swiss defense, to reach Richarlison on the right side inside the area, to pass it to Vinicius Junior in front of the goal, but defender Vidmir intervened wonderfully to push the ball away from in front of his goal.

The first real attempt was in the 27th minute, after an excellent pass from Rafinha from the right, to the far left side of the area, to be met by Vinicius, who was free from control, with a shot towards the goal, but goalkeeper Sumer shone and pushed it to a corner.

After 3 minutes, Rafinha launched from the right wing of Brazil into the midfield in front of the penalty area, to fire a shot that reached easily in the middle of the goal, into the arms of Sumer.

In the 44th minute, the Brazilian national team got a corner that Rafinha executed from the right side, inside the penalty area, and Thiago Silva met it with a header that hit one of the Swiss defenders and passed by the goal for a new corner.

With the start of the second half, Brazil coach Tite made his first substitutions, with Lucas Paqueta leaving and Rodrygo entering, in an attempt to increase the offensive effectiveness.

Alisson, the samba goalkeeper, almost cost his team an own goal, after he kept the ball more than necessary, to press Embolo, the Swiss striker, and succeeded in forcing Alisson to make a mistake, but the ball reached Casemiro, who dispersed it.

Richarlison was close to scoring his third goal in the tournament, after Vinicius crossed a plate of gold inside the six yards, and the Tottenham striker failed to follow it into the net, missing the opportunity for his team to advance in the 56th minute.

And in the 64th minute, Vinicius scored a white goal, after a quick sentence from the Brazilian players, which ended with a wonderful pass to Vinicius, who penetrated into the area and scored quietly, but the referee canceled the goal due to offside Richarlison at the beginning of the game.

And from a corner kick in the 81st minute, Rafinha executed it inside the area, to be dispersed by the defense, and Guimarães matched it with a header aimed directly at the goal, but Sumer succeeded in catching it.

And in the 83rd minute, Brazil scored the goal of progress, after an excellent touch from substitute Rodrigo, to reach the ball to Casemiro, who fired an unstoppable shot at a difficult angle for the goalkeeper, to enter the net, and Sumer contented himself with watching it inhabit his net.

Rodrigo almost doubled the score for Samba with a second goal, after he received a ball inside the area to fire a powerful shot, which the goalkeeper sent to a corner.

With great ingenuity, Vinicius missed the opportunity to kill the match in the 90 + 3 minute, after a quick counterattack in which a Brazilian duo launched against one player from the opponent, so Vinicius preferred to pass rather than pass, so that Akanji succeeded in clearing the ball brilliantly.

Seconds later, Rodrigo missed a new opportunity, after the Swiss defense collapsed, as the ball reached him inside the area, and he fired a powerful shot, but the Swiss defender pushed it away in time for a corner.