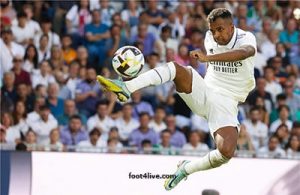 Real Madrid continued its winning streak, by winning (2-1) during the match against Real Betis, on Saturday evening, in the fourth round of La Liga, in the Real Madrid stronghold “Santiago Bernabeu”.

Real Madrid benefited from the duo, Vinicius Junior and Rodrygo Goes, who scored the royal goals in the 9th and 65th minutes, while Sergio Canales scored Real Betis’s goal in the 17th minute.

With this victory, Real Madrid raises its score to 12 points at the top of the La Liga standings, and Real Betis’s balance freezes at 9 points in second place.

The match began in a state of controversy, as Dani Carvajal dropped Real Madrid player Nabil Fekir inside the area, who demanded a penalty kick, but the match referee did not award anything in the 5th minute.

Vinicius Junior scored the goal for Meringue in the 9th minute, receiving a deep ball from David Alaba and with one touch, dropping the ball over Real Betis goalkeeper Rui Silva.

Real Betis suffered a painful blow by injuring French midfielder Nabil Fekir, and he made an emergency exit in the 10th minute, and Luis Henrique participated in his place.

The response came quickly with the equalizer for Betis in the 17th minute, as Sergio Canales received a pass from his colleague Borja Iglesias inside the area, and hit the ball between the feet of Real Madrid goalkeeper Thibaut Courtois.

Karim Benzema, the Real Madrid star, almost scored the second goal, as he hit a ball that passed over Real Betis’ goal in the 24th minute.

Benzema returned to shoot a powerful ball in the 38th minute, but it passed over goalkeeper Rui Silva’s goal.

The referee awarded a free kick to Real Madrid from outside the penalty area, which was executed by David Alaba, but it passed away from Betis’ goal in the 43rd minute.

The first half ended with a 1-1 draw.

With the start of the second half, Real Madrid almost scored the second goal, as Betis goalkeeper Rui Silva saved Benzema’s shot on the goal line.

And Rodrigo Joyce managed to add the second goal for Real Madrid in the 65th minute, as he received a cross into the penalty area from his colleague Fede Valverde and with one touch, he settled the ball under the right of goalkeeper Rui Silva.

And denied the horizontal crossbar Rodrygo to add the third goal for Real Madrid in the 70th minute.

Luka Modric sent a cross from the right side into the penalty area towards David Alaba, who headed a header over Rui Silva, Betis goalkeeper, in the 71st minute.

Real Madrid goalkeeper Thibaut Courtois starred in blocking a powerful shot from Betis’ Guido from outside the area, and turned the ball into the corner in the 75th minute.

Things calmed down in the last quarter hour of the match, so Meringue secured the three points well.