Casemiro: I did not leave Real Madrid for money… and this is my wish for Ronaldo 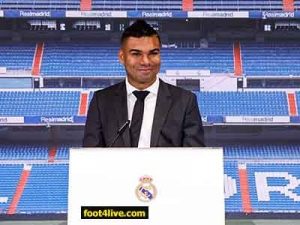 The Brazilian international, Casemiro, who recently moved to Manchester United, said today, Monday, that he did not leave Real Madrid for the sake of money, as some have repeated.

“When you make an important decision in your life, you think about a lot of things,” Casemiro said during his farewell conference for the Royal Club.

He continued, “After winning the Champions League, I told my agents I thought I had finished my stage at Real Madrid. After the vacation, I had the same feeling. I am the happiest person in the world, and I think I made history.”

He added: “I am looking for new challenges and goals, to experience a different culture and club. I want to help the team (Manchester United) as I did here, and I am full of hope.”

He continued: “Things did not go as quickly as they seemed, and my wife supported me in the decision I made .. It was difficult to talk to President Peres, and honesty is one of my values, so I was honest with him.”

Casemiro added, “The feeling I had was that my stage in Real was over. The Premier League was a tournament that I loved, and I wanted to play there. I needed a change.”

And he added: “People who think I left for money don’t know me… If my departure was for money, I would have left years ago… But Manchester United is a good club for me, and I will leave because my time with Real Madrid is over.”

He continued, “It was difficult to tell Kroos and Modric to leave. I will go to the biggest club in England, and I will remain a fan of Real Madrid. Of course I had doubts, because such an important decision is difficult to make.. But I was clear … and it was time to think about the new challenge.” “.

He added, “They taught me that there are no mountains that cannot be climbed, which is a difficult adventure, but it is a new challenge. If it were up to me, I would play against Liverpool today.”

On his replacement in Merengue, Casemiro said: “Real Madrid always includes the best players, and Camavinga or Valverde can play my role, and Chuamini is a key player in the French national team. The team undoubtedly has good alternatives, and will continue to win titles.”

He added, “I did not talk to Tite (Brazil coach) about my decision, and I did not talk to Cristiano Ronaldo, but I want to play with him, and I hope he stays in Manchester, as he is one of the best players in the world.”

And he concluded: “Winning the award for the best player in the European Super Cup, showed what I am, and what I have of my value, but I already thought about leaving.”