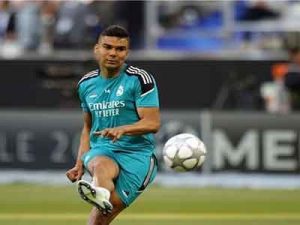 Manchester United continues its quest to strengthen its ranks, after a poor start to the season, during which it suffered two defeats in the first two rounds of the English Premier League, against Brighton and Brentford.

Manchester United are targeting Real Madrid’s midfielder Casemiro, in a deal that could be worth up to 60 million pounds, and would make him one of the highest-paid players in the team, if he agreed to move to Old Trafford.

According to the famous journalist Fabrizio Romano, who specializes in the transfer of players and coaches in Europe, Casemiro will hold a special session with Carlo Ancelotti, coach of Real Madrid, to discuss his future.

Casemiro has been with the royal team since 2013, and his current contract extends until 2025.

And the Spanish newspaper, “Marca”, indicated that Casemiro is considering moving to Manchester United, especially that he will receive a greater wage there than what he receives with Meringue.

He also sees that his period with Real Madrid is close to the finish line, after 7 years of success in the midfield, with duo Toni Kroos and Luka Modric.

For his part, Real Madrid will respect the decision of the Brazilian player, who is one of the club’s legends, despite his desire to continue, according to “Marca”.