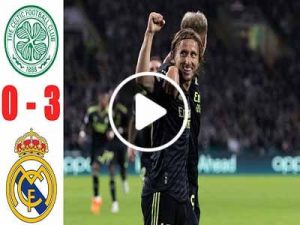 Real Madrid begins its continental campaign with a hat-trick against Celtic
Real Madrid began his campaign in his favorite championship, by winning 3-0 during the match against Celtic of Scotland, on Tuesday evening, in the first round of the group stage of the Champions League.

He scored for Real Madrid, Vinicius Junior, Luka Modric and Eden Hazard in the 56th, 60th and 77th minutes.

With this victory, Real Madrid is in second place with 3 points, a goal difference from leaders Shakhtar Donetsk, and Celtic comes in fourth place without points.

The match started with pressure from the hosts, and Celtic player Abada hit a strong ball that turned into the corner in the first minute.

Celtic’s Rio Hatat hit a ball from outside the penalty area, which was saved by Thibaut Courtois in the 20th minute, and the right-hand post of Courtois’ goal denied Celtic’s McGregor the lead in the 21st minute.

Real Madrid striker Karim Benzema complained of muscle pain, and could not complete the match, and coach Carlo Ancelotti decided to withdraw Benzema and push the Belgian Eden Hazard instead in the 30th minute.

Real Madrid’s Vinicius Junior received a ball deep into Celtic’s defense, and set off for goalkeeper Joe Hart, and the latter excelled in stopping the ball brilliantly in the 43rd minute.

In the second half, Vinicius Junior scored the goal for Real Madrid in the 56th minute, receiving a cross from the right side of his colleague Fede Valverde inside the area, and hit the net directly.

Luka Modric added the second goal for Real Madrid in the 60th minute, as he received a pass from Eden Hazard inside the area, and aimed at the foot of the foot to the right of goalkeeper Joe Hart.

Eden Hazard added the third goal for Real Madrid in the 77th minute, as he received a pass inside the area from Dani Carvajal and put it in the net.

Celtic’s Jota shot a powerful ball from the edge of the penalty area, it passed over the crossbar of Thibaut Courtois’ goal in the 81st minute, and Rodrygo missed the opportunity to add the fourth goal for Real Madrid in the 90th minute, with a shot from inside the area, to win the royal the first 3 points in his career.