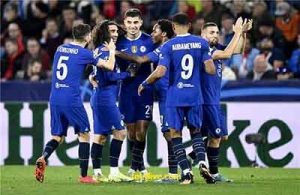 Mateo Kovacic scored in the 23rd minute and Kai Havertz (64) scored the two goals for Chelsea, while Junior Adamo scored the goal for Salzburg (48).

Chelsea raised its score at the top of the group to 10 points, while Salzburg’s balance froze at 6 points in second place, before facing Milan and Dinamo Zagreb, which will be held later on Tuesday evening.

Chelsea had an early chance in the second minute, when Bernardo misjudged Jorginho’s long ball, to catch Havertz, but goalkeeper Cohen reached it before him.

Salzburg waited until the 15th minute to respond to Chelsea, when Sucic took advantage of a gap in Chelsea’s defense and advanced to the edge of the penalty area, before firing over the goal.

Chelsea managed to open the scoring in the 23rd minute, when the ball escaped from Haveritz, to reach the Croatian Kovacic, who shot it directly from one touch to enter the net.

Chelsea almost consolidated their lead with a second goal in the 26th minute, when Gallagher took a corner kick, followed by Silva with his head, to be blocked by the goalkeeper, and the ball rebounded to Haveritz, whose attempt moved away from the goal.

And goalkeeper Cohen saved Salzburg’s goal from an investigator in the 32nd minute, when Haveritz invested the opening of the Austrian team’s defense, to pass to Aubameyang, who stood the goalkeeper for his attempt on the lookout.

The host responded in the 34th minute, through a low shot from Okafor, which goalkeeper Kepa Arrizabalaga saved, after a pass from Socic.

Gallagher went from the right side, before directing the ball into the penalty area, Havertz followed it with his head and the goalkeeper picked it up in two batches in the 36th minute.

Kiergard got a pass from Okafor, before his shot passed near the near post in the 40th minute, and Chelsea was about to score a second goal in the 44th minute, when Kovacic exchanged the ball with Sterling, but the goalkeeper reached the ball before Aubameyang shot it.

In added time of the first half, Sterling passed the ball in front of the goal to Aubameyang, whose attempt was brilliantly saved by Cohen.

3 minutes into the second half, Salzburg equalized through Adamo, who met Okafor’s low cross with one perfect touch to the right of goalkeeper Kepa.

Gallagher made a way between the Salzburg defenders, before directing a pass to Aubameyang, who saved goalkeeper Cohen alone in the 52nd minute, and a minute later, Jorginho headed a corner kick, before Adamo removed it from the goal line.

Once again, Cohn made a heroic display to banish the ghost of a dangerous attempt from Aubameyang in the 59th minute, and Okafor’s shot passed over Chelsea’s goal after a pass from substitute Cisco in the 63rd minute.

Chelsea regained their lead in the 64th minute, when Pulisic got rid of three players, before passing to Haveritz, who hit the ball with a perfect shot from the edge of the penalty area.

Salzburg tried to respond quickly in the 66th minute, when Chalubah headed the ball away, to reach Okafor, who fired a direct shot that Kiba saved, and a minute later, the Spanish goalkeeper returned to save his goal from Cisco’s low shot after the latter bypassed Chalubah.

Thiago Silva removed Pavlovic’s header before it crossed the Chelsea goal line in the 69th minute, and Gallagher’s shot rebounded from Sewald in the 74th minute.

Chelsea included Armando Broja and Cesar Azpilicueta instead of Aubameyang and Pulisic, and Kepa blocked Dedic’s shot in the 87th minute, before the rest of the minutes passed without anything new in terms of the result.