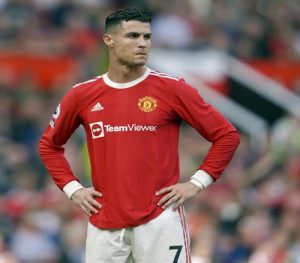 The Portuguese star, Cristiano Ronaldo, has angered the Manchester United fans, with his strange behavior, which increases the mystery about his future with the team.

Ronaldo participated mainly in Manchester United’s friendly against Rayo Vallecano, on Sunday evening, without affecting the team’s performance in the first half, before leaving between the two halves.

The match ended with the two teams tied 1-1.

however, last friendly match for Manchester United, before its first match in the English Premier League this season against Brighton next Sunday evening.

According to the news today, and especially the “Daily Mail” announced:

Ronaldo left Old Trafford, before the match ended against Rayo.

which angered the team’s fans on social media platforms, with the spread of a video clip of the Portuguese player leaving the stadium.

Ronaldo is seeking to leave Manchester United before his contract with the club expires one season.

In order to move to a team that participates in the Champions League, and the player missed the preparatory period for the team, which included a tour of Thailand and Australia.

You may like to read: A new Premier League deal is expected to bring extra funds to players.

You may like to read: Barcelona sells further TV rights to global investment firm