Cristiano Ronaldo to Saint Germain due to mbappi? 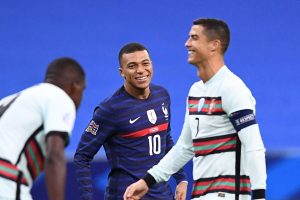 Cristiano Ronaldo to Saint Germain because of mbappi, is it True?

There was strong news during the past hours that Kylian Mbappe, the star of Paris Saint Germain, informed his Argentine coach, Mauricio Pochettino, that he would not renew his contract with the club.

Mbappe’s contract expires in the Princes’ Garden in the summer of 2022, but his decision may push Saint Germain to sell him before the new season, in order to avoid his free departure after that.

According to the Italian newspaper, Corriere dello Sport, Mbappe’s decision may also direct the attention of Saint Germain towards Cristiano Ronaldo , the Juventus star, who has not decided his position so far, whether by completing his contract or leaving.

The Paris club wants to sign a replacement for Mbappe, at the same level and scoring capabilities, which is available in Ronaldo.

As for Juventus, its eyes are set on Argentine Mauro Icardi, the Paris Saint Germain striker, who will be his first request if PSG makes an offer to include the “Don”.

You Can watch all your matches on our website football live stream, with good quality and free, you need only internet and you can watch from home easely and safely.