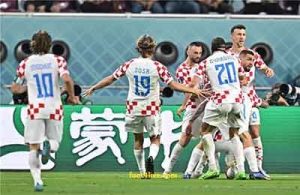 The Croatian national team defeated its Canadian counterpart (4-1), this evening, Sunday, at Khalifa International Stadium, in the second round of Group F in the Qatar World Cup.

Then Marco Levia scored the second goal in the 44th minute, Andrej Karamaric returned to score his second goal and the third for Croatia in the 70th minute.

While Lovro Mayer added the fourth goal for the Croatian national team in the fourth minute of calculated time instead of lost for the second half.

The Croatian team raised its tally to four points, leading the group on goal difference from second-placed Morocco.

The start came quickly from the Canadian national team, as it managed to score when Buchanan passed a cross that Alphonso Davies met with a wonderful header into the net.

Kramaric sent a cross, but it hit defender Miller to pass towards the net, but goalkeeper Burian managed to save and catch it twice.

The ball reached Levaya in front of the 6-yard area, to try to shoot it as he fell on the field, but the Canadian goalkeeper successfully caught it.

And Levia passed a wonderful ball to Kramaric to penetrate into the area and fire a ground shot into the net, but the referee canceled it due to the presence of an offside situation.

The ball reached Kovacic, who in turn passed it to Levia on the right inside the area, to fire a missile shot that sparkled Burian and sent it to a corner.

Kramaric managed to score the equalizer, after an excellent pass from Perisic, which the striker met with a one-touch shot with his left foot into the net.

Levia received a pass from Juranovich, hit the Canadian defense in depth, and fired a creeping shot into the net, to end the first half (2-1).

Burian saved a new opportunity for Croatia, after Sosa crossed the ball into the area, and the Canadian goalkeeper managed to clear it before Kramaric shot it.

The Canadian goalkeeper continued his brilliance and saved a goal from Kramaric’s feet, who reached the ball at the penalty mark, and fired a powerful shot, which the goalkeeper turned into a corner.

Jonathan David received the ball and fired a missile shot from a long distance, in which Croatia goalkeeper Levakovic shone, and pushed it away with his fingertips for a corner.

Perisic sent a cross that passed in front of everyone to reach the other side, and Kramaric met it with a low shot into the Canadian net.

And from a fatal mistake by defender Kamal Miller, Orsic singled out Burian’s goal, and passed it to Lovro Mayer to put it in the net with ease, and the match ended (4-1).