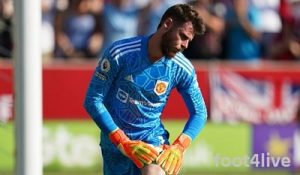 David de Gea news: He made a brave stand after his team lost 0-4 to Brentford.

Manchester United goalkeeper David de Gea made a brave stand after his team lost 0-4 to Brentford, yesterday, Saturday, in the second round of the English Premier League.

De Gea apologized after the match for the mistakes he made, which caused the Red Devils to lose.

David de Gea news: “The Sun” revealed that De Gea personally asked to appear on “Sky Sports” after the match to apologize for his mistakes and blame himself for the loss.

therefore, De Gea made a big mistake in Brentford’s first goal, after Belinda Joshua da Silva hit a weak ball from outside the penalty area, strangely passing under the hands of the Spanish goalkeeper, and into the net.

moreover, De Gea also failed, in the second goal, after passing the ball to his colleague Christian Eriksen, who was under pressure on the edge of the penalty area, and Mathias Janssen broke it and put the ball easily into the net.

additionally, in our opinion, it’s not his fault alone, as the technique of playing by eric Tenhag is not visible to us yet!

You may like to watch: Manchester City vs Bournemouth 4 0 All Gоals Extеndеd Hіghlіghts 2022