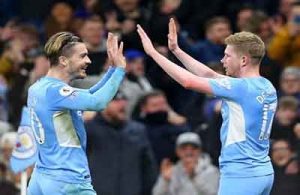 Manchester City star Kevin De Bruyne said that his colleague Jack Grealish is subjected to a lot of unfair criticism, because he is an English player.

De Bruyne added in comments highlighted by the Guardian newspaper. “It is not about football. It is far from it, there is a lot of focus on the English players, and people tend to know what is happening with them,”

“I feel that we are foreign players, for example, if you spend a night outside, we are not checked much, but if an English player goes out, it is always in the media.”

And he noted, “I think that people prefer to give their opinion on this matter, the player is free to do what he does during his private life, no one should care, but people do.”

“With all due respect, Grealish has been at Aston Villa before, there if you lose a game, it’s not the end of the world, but if we lose a game here, it’s different.”

“We have to play hard every week and win matches. This is different and Grealish needed to adapt to it. All that matters is that we win and Jack is doing well.”