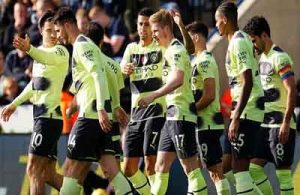 Kevin De Bruyne scored the game’s only goal in the 49th minute.

Manchester City’s balance rose with this victory to 29 points in the lead, one point ahead of Arsenal, which awaits Sunday’s task against Nottingham Forest, while Leicester’s balance froze at 11 points in 17th place temporarily.

Manchester City coach Pep Guardiola relied on the 4-2-3-1 method, as John Stones cooperated with Aymeric Laporte deep in the back line, with the support of full-backs Manuel Akanji and Joao Cancelo, and Rodri exchanged roles with Ilkay Gundogan in the midfield, and the trio moved. Bernardo Silva, Kevin De Bruyne and Jack Grealish, behind striker Julian Alvarez, who made up for the absence of injured Norwegian star Erling Haaland.

On the other hand, Leicester City coach Brendan Rodgers relied on the 3-4-2-1 method, as the back line formed from the trio of Daniel Amarty, Caglar Soyuncu and Wut Weiss, and Timothy Castagni and James Justin were present on both sides of the field, and in the middle of the field was Kieran Dusbury Hull. Yuri Tielemans, while James Madison and Huffy Barnes moved behind veteran striker Jamie Vardy.

Manchester City dominated the match from the start, but could not form a threat to the goal, until the 12th minute, when De Bruyne raised a cross, Rodri followed it with his head and was saved by goalkeeper Ward.

Three minutes later, De Bruyne passed a through ball from the right side, towards Alvarez, who was alone with the goalkeeper, but the latter narrowed the angle to him and blocked his attempt.

And goalkeeper Ward continued his strong presence in the 17th minute, when he was removed in the full presence of Silva’s attempt, after a lightning pass from De Bruyne.

Leicester finally threatened his guest’s goal in the 24th minute, when a through ball reached Vardy, who in turn passed it to Barnes.

De Bruyne exchanged the ball with Gundogan and Alvarez, before breaking into the penalty area and hitting a ball in the goalkeeper’s standing position in the 28th minute.

Akanji’s shot rebounded from Tillimans in the 32nd minute, and the Manchester City players demanded a penalty after Grealish fell inside the area, but the referee ordered to continue playing, so that the first half ended with a 0-0 draw.

City almost opened the scoring in the first minute of the second half, when Silva passed a ball from the right, to Rudy, who hit a creeping ball that passed next to the post.

City got what they wanted in the 49th minute, when De Bruyne took a direct free kick in the far top corner of Leicester’s goal, opening the scoring in the match.

Leicester almost equalized the score early in the 53rd minute, when Madison took a corner kick, towards Tillimans, who shot the ball “on the fly” from the edge of the penalty area, which Ederson saved before it bounced off the crossbar.

Silva could not catch Grealish’s ball in front of goal in the 57th minute, and De Bruyne passed the ball on the right to Silva, who was saved by Ward’s strong attempt in the 65th minute.

Kelechi Ihyanacho and Patson Dhaka entered the Leicester squad to reinforce the team’s attack, while Guardiola included his Portuguese defender Ruben Diaz instead of Akanji.

Leicester launched a quick counter-attack, after which Madison passed the ball to Iheanacho, who shot from the first touch away from the goal in the 77th minute.

The referee awarded a free kick in favor of Leicester, which Madison saved towards the near post, but it rebounded from Castagni’s shoulder instead of his head, so the ball went wide in the 84th minute.

Ederson picked up Dhaka’s header in the 86th minute, before Ihyanacho’s slithering shot passed the near post in the 88th minute.