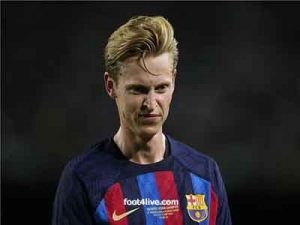 De Jong’s name is associated with leaving the Catalan team, in the current summer Mercato, due to a desire on the part of Barca to improve the club’s economic situation.

According to the Spanish newspaper, Mundo Deportivo:

De Jong’s initial desire is to continue at the Camp Nou, but he told the Barca players in the dressing room that if he had to leave the Catalan club, Chelsea would be a good option than Manchester United.

The newspaper confirmed that :

De Jong completely closed the door to his joining the ranks of Manchester United.

Despite the presence of compatriot Eric Tin Hag, at the helm of the technical leadership of the team, but the player wants to participate in the Champions League.