Deschamps: France is solid and the Tunisia match is a great opportunity 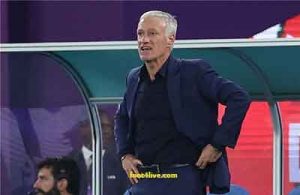 Didier Deschamps, the French national team coach, praised his players after defeating Denmark (2-1), and qualifying for the round of 16 in the 2022 World Cup in Qatar.

Deschamps said after the match on the French TF1 channel “We performed wonderfully individually and collectively,” praising the reaction of his players after Denmark’s success to scoring the equalizer.

The cock coach added, “Guaranteeing qualification for the second round is a matter of satisfaction, and facing Tunisia in the third round will be a great opportunity to confirm our leadership in the group.”

Deschamps concluded his remarks, “We are in an ideal position, our team is very solid, and we hope to achieve a great achievement.”

And by qualifying for the round of 16, the French national team ends the exit complex (the defending champion) from the first round that has haunted each of (Italy, Spain, Germany) since the 2010 World Cup.

In the second round, the roosters are waiting for the two qualified teams from Group C, which includes Argentina, Poland, Mexico and Saudi Arabia.