Deschamps: I don’t care what Giroud says to the media 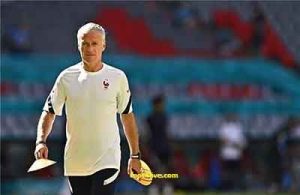 Didier Deschamps, coach of the French national team, was surprised by the uproar surrounding one of his technical decisions.

Since late last year, Deschamps has removed Milan striker Olivier Giroud from his calculations, following Karim Benzema’s return to the roosters’ team since the Euro 2020 competitions.

Deschamps said before facing Austria, today, Thursday, in the European Nations League. “I don’t know what Giroud is saying to the media, and I’m not interested in that, what I care about is our cross-talk,”

He added, in statements highlighted by the newspaper “L’Equipe”: “I know how to manage things, there is a difference between saying and doing. I would not say that calling Giroud is impossible, but it is one of the things I am thinking of in the near future.”

He stressed, “Giro does not need to convince me of his abilities. He knows my method, and I will not repeat what I said in previous times about his position. There are many players that I excluded in previous periods because of their condition, and the noise was less.”

the world champions coach concluded his statements: “Giro is working very hard, and his goal is to do his best like the rest of his colleagues, because the competition is strong, and in the end the decision is mine.”

Olivier Giroud returned to the French national team, taking advantage of Karim Benzema’s injury, as the roosters prepare to face Austria and Denmark in the European Nations League.