Did Ronaldo intentionally respond to Ibrahimovic? 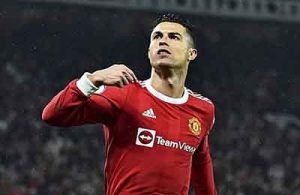 The Swedish Zlatan Ibrahimovic, the Milan star, had responded to his statements asking him to retire, and said: “If I see a player stronger than me, I will retire. But I haven’t seen that yet.”

Ronaldo published his picture today, wearing boxing gloves and showing his physical strength, prompting his followers to confirm through the comments that he is the strongest athlete in the world.
Ronaldo wrote, commenting the picture, “Turn negatives into incentives, and turn mistakes into victories.”

It is worth noting that Ronaldo tried to leave Manchester United this summer, but his club stuck to his stay.

The Portuguese star managed to score his first season goal, last Thursday, when he scored a goal against the Moldovan team Sheriff Tiraspol, in the European League groups, second round .