Dier : Tottenham is my priority, not the National Team 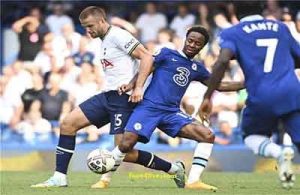 The English international, Eric Dier, thanked the Italian Antonio Conte, the Tottenham Hotspur coach, and the team players, for his help for the opportunity to be called up again to his country.

England coach Gareth Southgate has called Tottenham defender Dier to his list, in preparation for the matches between Italy and Germany in the European Nations League.

Dier played his last 45 international matches with the England national team, in November 2020.

However, his performance with Tottenham earned him a chance to play for England at the Qatar 2022 World Cup.

Dyer’s improvement in the 28-year-old coincided with Conte appointment as Spurs coach, in November 2021.

The player believes that he can continue this improvement in performance.

He explained: “I’m just looking forward to moving forward… and I think, as Conte said this week, that as per my ambition, this can be just a starting point for me… I think I can still do a lot… honestly, it wasn’t (the call-up). ) is what I was thinking.”

He explained, “I was just thinking about being as good a player for Tottenham as possible… Everything that happens is a result of this… I see that this is the only thing I have to focus on, the only thing I can control.”

“I just thank the way my teammates and coaching staff at Tottenham have supported me, supported me and tried to help me get back into the national team,” Dier continued.